Programmed cell death pathways have been implicated in the mechanism by which neurons die following brief and prolonged seizures, but the significance of proapoptotic Bcl-2 family proteins in the process remains poorly defined. Expression of the death agonist Bcl-2–interacting mediator of cell death (Bim) is under the control of the forkhead in rhabdomyosarcoma (FKHR) transcription factors. This prompted us to examine the response of this pathway to experimental seizures and in hippocampi from patients with intractable temporal lobe epilepsy. A short period of status epilepticus in rats that damaged the hippocampus activated FKHR/FKHRL-1 and induced a significant increase in expression of Bim. Blocking of FKHR/FKHRL-1 dephosphorylation after seizures improved hippocampal neuronal survival in vivo, and Bim antisense oligonucleotides were neuroprotective against seizures in vitro. Inhibition of Akt increased the FKHR/Bim response and DNA fragmentation within the normally resistant cortex. Analysis of hippocampi from patients with intractable epilepsy revealed that Bim levels were significantly lower than in controls and FKHR was inhibited; we were able to reproduce these results experimentally in rats by evoking multiple brief, noninjurious electroshock seizures. We conclude that Bim expression may be a critical determinant of whether seizures damage the brain, and that its control may be neuroprotective in status epilepticus and epilepsy. 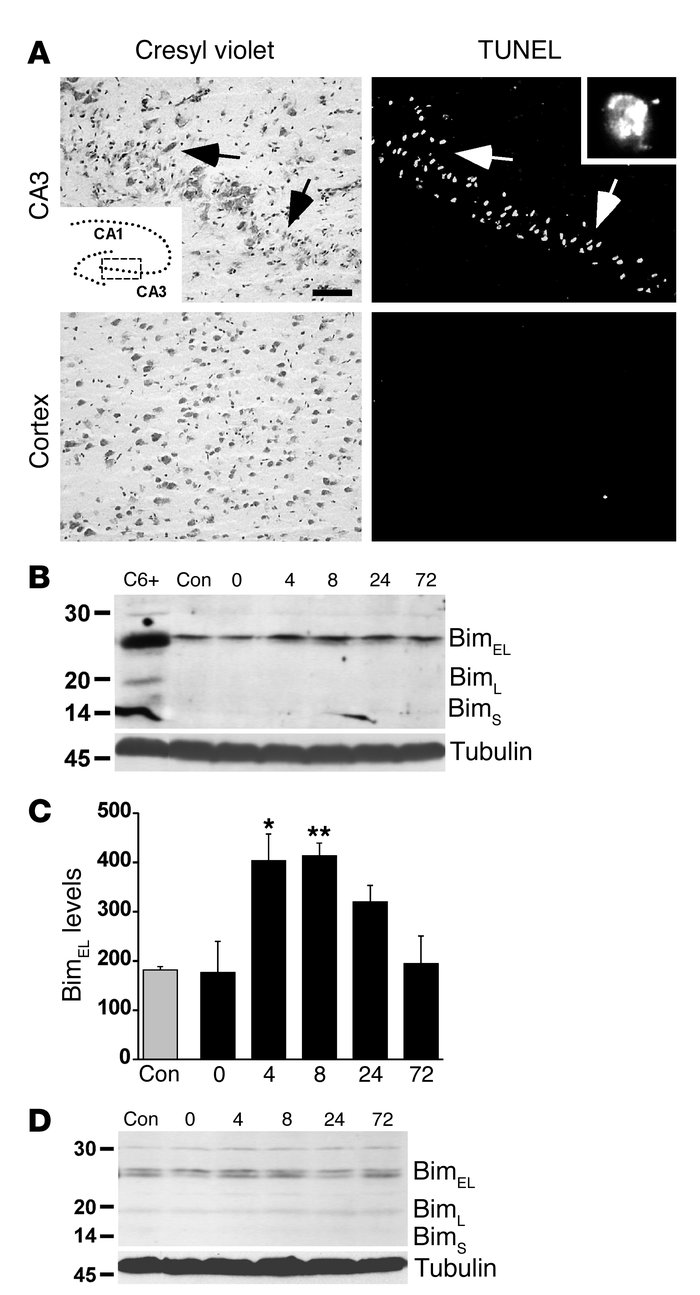 Seizure-induced hippocampal injury is associated with Bim overexpression. (A) Representative photomicrographs showing histopathology at 24 hours, in which marked loss of hippocampal CA3 neurons and the appearance of TUNEL are observed (top panels), while the cortex is largely spared (bottom panels). Inset in top left panel: Schematic of the hippocampal area from which images were taken (box). Inset in top right panel: ×100 magnification of a TUNEL-stained CA3 cell. Scale bar: 75 μm. (B) Representative Western blot ( = 2 per lane) showing increased hippocampal BimEL levels following seizures in the rat. Molecular weight markers (kDa) are given on the left, and time is shown in hours after termination of seizures. Staurosporine-treated rat C6 glioma cell lysates express all three Bim isoforms and are included as a positive control (C6+). α-Tubulin is shown below to confirm equivalency of protein loading. (C) Graph showing quantification of changes in BimEL expression (OD units) after seizures. * < 0.05, ** < 0.01 vs. control (con). Data are from four rats per group. (D) Representative Western blot ( = 2 per lane) from cortex, revealing that Bim levels do not change in this region following seizures. Immunoblots are representative of two or three independent experiments.