Endothelial lipase is a major determinant of HDL level

Endothelial lipase is a major determinant of HDL level

A new member of the lipase gene family, initially termed endothelial lipase (gene nomenclature, LIPG; protein, EL), is expressed in a variety of different tissues, suggesting a general role in lipid metabolism. To assess the hypothesis that EL plays a physiological role in lipoprotein metabolism in vivo, we have used gene targeting of the native murine locus and transgenic introduction of the human LIPG locus in mice to modulate the level of EL expression. Evaluation of these alleles in a C57Bl/6 background revealed an inverse relationship between HDL cholesterol level and EL expression. Fasting plasma HDL cholesterol was increased by 57% in LIPG–/– mice and 25% in LIPG+/– mice and was decreased by 19% in LIPG transgenic mice as compared with syngeneic controls. Detailed analysis of lipoprotein particle composition indicated that this increase was due primarily to an increased number of HDL particles. Phospholipase assays indicated that EL is a primary contributor to phospholipase activity in mouse. These data indicate that expression levels of this novel lipase have a significant effect on lipoprotein metabolism. 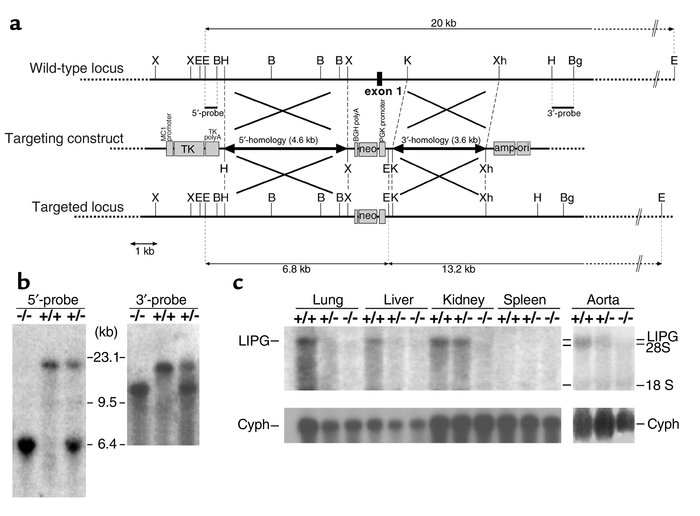 Targeting of the mouse endothelial lipase gene. () The wild-type locus of mouse (top), the targeting construct (middle), and the targeted locus (bottom). Exon 1 was replaced with the neomycin phosphotransferase gene (neo), and recombination was detected by Southern blot analysis using the probes indicated. X, I; B, HI; K, I; Bg, II; H, III; E, RI; Xh, I. () Both probes gave a 20-kb wild-type band on Southern blotting, whereas the targeted recombinants showed a 6.8-kb band with the 5′probe and a 13.2-kb band with the 3′probe. Targeted stem cells were characterized by the presence of both DNA fragments. () Northern blot analysis showed expression in mouse tissues. A full-length mouse cDNA was used as a probe. Cyph, cyclophilin.