Regulatory subunit KCNE3 (E3) interacts with KCNQ1 (Q1) in epithelia, regulating its activation kinetics and augmenting current density. Since E3 is expressed weakly in the heart, we hypothesized that ectopic expression of E3 in cardiac myocytes might abbreviate action potential duration (APD) by interacting with Q1 and augmenting the delayed rectifier current (IK). Thus, we transiently coexpressed E3 with Q1 and KCNE1 (E1) in Chinese hamster ovary cells and found that E3 coexpression increased outward current at potentials by ≥ –80 mV and accelerated activation. We then examined the changes in cardiac electrophysiology following injection of adenovirus-expressed E3 into the left ventricular cavity of guinea pigs. After 72 hours, the corrected QT interval of the electrocardiogram was reduced by ∼10%. APD was reduced by >3-fold in E3-transduced cells relative to controls, while E-4031–insensitive IK and activation kinetics were significantly augmented. Based on quantitative modeling of a transmural cardiac segment, we demonstrate that the degree of QT interval abbreviation observed results from electrotonic interactions in the face of limited transduction efficiency and that heterogeneous transduction of E3 may actually potentiate arrhythmias. Provided that fairly homogeneous ectopic ventricular expression of regulatory subunits can be achieved, this approach may be useful in enhancing repolarization and in treating long QT syndrome. 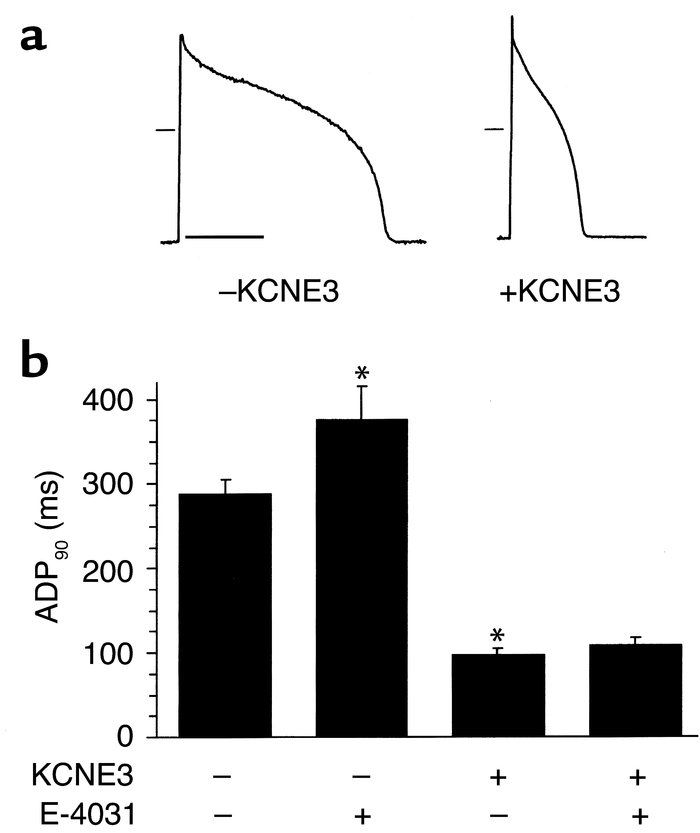